Calf watch is officially on!

Part of our farm dream is to establish a quality herd of cattle. We are well on our way. Our two heifers were impregnated in November and are due at the end of this month. Similar to humans, the gestation period for cattle is about nine months. Like any pregnancy, the due date depends on a lot of factors and first births can be as early as two weeks before the due date. 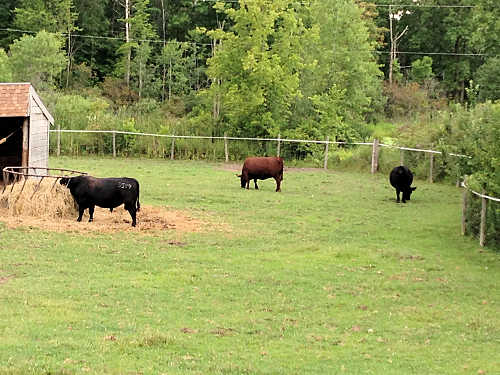 Today, both heifers look very pregnant. Callie seems a bit bigger than Cherry. We hope both births go smoothly and the calves are a good weight for a first birth.

The bull, Pedro, is a calm, laid-back Black Angus. Our heifers are Red Angus. Cherry is a Maine-Anjou cross and Callie is part Shorthorn. Based on their genetics and their dispositions, we should have some very nice calves soon.

Just like women who are pregnant, we’ve been watching their feed. Plenty of good hay is always available. They are on pasture, so they can graze if they want. And they get supplemental feed to make sure they don’t lose weight, but not so much that they get fat.

Once the calves are born, we will have a whole, new routine here. But mostly watching the young calves being introduced to their world and just having fun!

KeiLin Farm, a producer of farm fresh beef and eggs, as well as premium hay, is located in Rose Township, Michigan and is in the process of acquiring the required licenses to become a small wine maker. 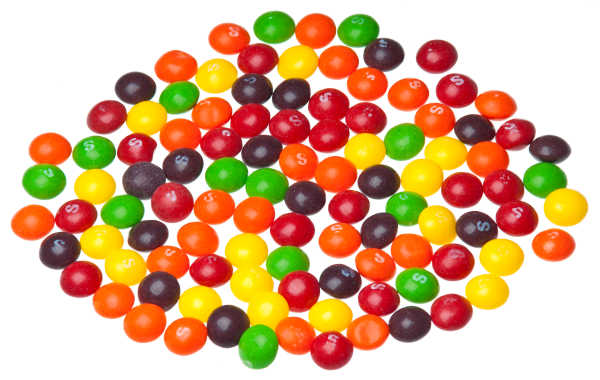 A few days ago Skittles® made the headlines in Wisconsin and beyond. No, they were not introducing a new color or flavor. A truckload lost its load and they were dumped on the highway! So the question was, where were they going? Was someone going to eat this candy of candy that was not packaged in its traditional red bag? Why was it in the bed of that truck?

The candy were rejects – because they were missing the “S” on them – and were being sent to be part of the feed mix for cattle. Cattle? Who would give candy to cattle?

I decided to do a little research because, knowing that our horses liked a peppermint from time to time, I thought maybe I needed to get some candy for our cattle as well.

The answer was – Yes, candy not suitable for human consumption is often mixed with feed for cows – primarily dairy cows. Other livestock can also be fed candy as part of their diet. Notice, the key word here is PART – not solely, not primarily, but PART. Just like sugars are part of a human diet.

But isn’t sugar bad? For the cow or for the human? Over ten years ago fats, oils, and sugars were added to the food pyramid. I remember that because I was always watching sugar intake for both myself and my children.

It turns out the sugar, added in small amounts, is actual good for digestion. The sucrose in plain table sugar helps break down other complex sugars so your body can absorb, process, and distribute them to other parts of your body.

Similarly in cows, sugar is used to break down the healthy bacteria, fiber and protein found in the cattle’s feed. By adding the candy to their feed ration is actually helping their system to absorb the nutrients in their food. Remember – the cows are not fed pure candy any more than you would serve your child candy for dinner. It is simply used as a supplement that has a job to do.

I then checked out nutritional information for our horses. First and foremost, the horse’s digestive system is nothing like a human’s or a cow’s. Most of the simple sugars and carbs are broken down in the small intestine and absorbed. A look at the amount of simple sugar and carbs in different hay or grasses told me that they receive a substantial amount every day.

My thoughts? Skip the peppermints for the horses, but candy for the cows may be the better choice than having it go into a landfill.

KeiLin Farm, a producer of farm fresh beef and eggs, as well as premium hay, is located in Rose Township, Michigan and is in the process of acquiring the required licenses to become a small wine maker.

Recent Posts: Fresh From Our Farm 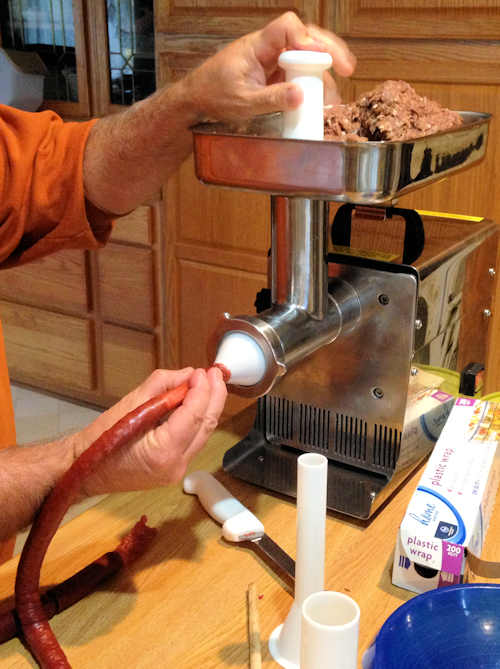 If you are taking the time and skill to harvest a nice deer for your family, the venison you serve should be from the deer you bagged.

Proper field dressing – that includes getting ALL the organs out and the skin off – is critical to quickly cooling your meat down and preventing it from spoiling.

If you are hunting with the goal of serving great venison steaks and roast, you don’t want to be tasting adrenaline.

Memorial Weekend starts the picnic and grilling season for most of us. From hamburgers to steaks to chicken or ribs, nothing is safe from the flames. But we need to do it right to keep it safe for everyone. Wash your hands That goes without saying, you have to keep clean around food and that […]